The Minnesota Twins play at Target Field, located in downtown Minneapolis. Twins fans didn’t have to worry about the sun during the team’s 28 years playing indoors at the Metrodome, but these days it is a big factor! Though Minnesota may be known for cold snowy winters, it actually has hotter summers than many of it’s nearby Midwest neighbors. This guide will help Twins fans identify the best Target Field shaded seats.

Target Field Orientation to the Sun

Target Field was designed with home plate facing due east. If the Twins ever played at 9:00 a.m., batters would be look directly into the sun while it rises over the center field fence. Obviously, that’s not an issue, but fans do need to be aware of the sun location at Target Field, as the playing field and large sections of the stands receive plenty of sunlight during the summer months. 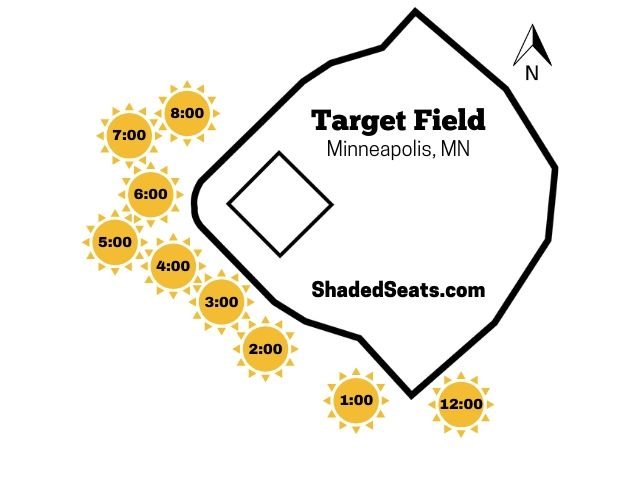 Click or tap here to open the Target Field seating chart on SeatGeek.

Where are the shaded seats at Target Field?

As a general rule, the seats in the shade at Target Field are located:

The Twins play a majority of their home games at 7:10 p.m., although they will occasionally bump up first pitch by a half hour or an hour. Day games in Minneapolis typically start at 1:10 p.m. However, the Twins occasionally move those games up by an hour to 12:10 p.m.

For afternoon games at Target Field, the sun will be shining behind the right field foul pole at the start of the game. As the innings progress, the sun will be focus directly on the fans sitting along the 3rd baseline and in the left field stands. Barring any cloud coverage, these fans will be dealing with the sun throughout the game. To avoid the sun, the best option is along the 1st baseline, sections 101-110. Some of these seats may be in the sun when the game begins, but this side of the stadium will be the first to experience shade. The closer you are to home plate on the 1st base side of the stadium, the less time you’ll have to wait until the sun is at your back and you’re cool in the shade.

Another good option to protect yourself from the sun is the upper deck. Target Field features one of the more expansive overhangs in the majors. Sections 301-327 should be well-shielded from the sun throughout the game, especially seats in the back half of any particular section. The first few rows of the 300-level may receive periods of sun over the course of the game. Of course, there is no such overhang for the 300-level seats in left field or the 200-level seats in right field. Outside of sections 132-134 in right field and to a lesser extent, sections 128-131 in left field, most of the outfield seats at Target Field will be vulnerable to the sun during day games.

During the summer months, the sun doesn’t set in Minneapolis until 8:30 to 9:00 p.m. most nights. That means the sun will still be a factor during night games at Target Field, especially those with a 6:10 first pitch. The good news is that by the start of a night game, the sun location is almost directly behind home plate. Between the position of the sun and Target Field’s overhang, most of the seats in foul territory should be in the shade at the start of a night game. However, to play it safe, it’s best to sit as close to home plate as possible because some sections, particularly deep down the 1st baseline, may be staring at the sun until it dips below stadium. Meanwhile, seats in the outfield, especially 200-level or 300-level outfield seats, will remain vulnerable to the sun until it sets.

Use the individual game links on the side (or bottom of the page on mobile) or click or tap here to see the Twins upcoming game list on SeatGeek. Learn about why we recommend buying MLB tickets on SeatGeek.