The Seattle Mariners play their home games in T-Mobile Park (formerly Safeco Field). T-Mobile Park features a retractable roof which is mostly used to prevent rainouts. Despite Seattle’s overcast reputation, T-Mobile Park receives plenty of sun during the summer months. Unless it’s raining, the roof is likely to be open, so fans will want to use this guide to find the best T-Mobile Park shaded seats.

T-Mobile Park Orientation to the Sun

T-Mobile Park is built so batters face directly to the northeast. With this orientation, the sun rises over the center field wall every morning and sets each evening beyond the 3rd base stands and Elliott Bay, which is just a few blocks away. Of course, there are parts of T-Mobile Park that receive plenty of sun during the day, so it’s important for fans to know where they can find shade. 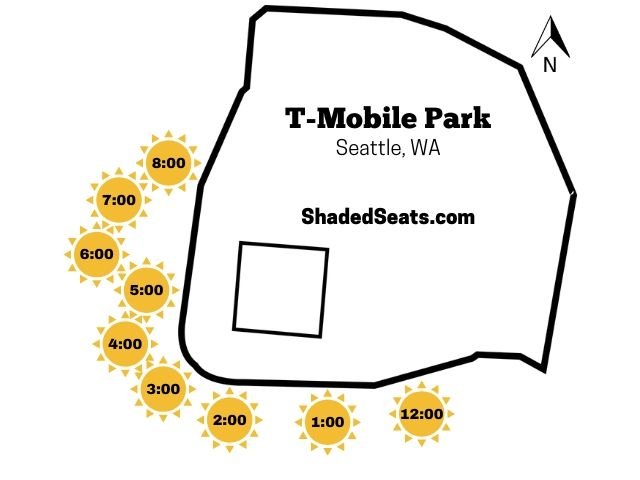 Click or tap here to open the T-Mobile Park seating chart on SeatGeek.

Where are the shaded seats at T-Mobile Park?

As a general rule, the seats in the shade at T-Mobile Park are located:

At first pitch of an afternoon game at T-Mobile Park, the sun is located along the 1st baseline but quickly moves to a position behind the plate. This means the seats closest to the plate are likely to be in the shade. Of course, this applies primarily to seats in the upper level of the stadium, sections 326-335, although more of the upper deck should work its way into the shade as the game moves along because of the overhang.

Some of the seats in the lower level that sit directly below the press box, sections 127-133, could also find some shade in the middle of the day, although the closer to the field, the longer the wait to get into the shade. Meanwhile, most seats in the outfield should be avoided if you’re trying to stay out of the sun, as most will have little or no sun protection. Sections 306-310 in right field will have a large chunk of roof hovering above them to keep them shaded. However, as the sun moves to the west, these seats will be looking right at the sun, meaning the roof will do little to protect them.

Seats in the Shade at Mariners 3:40 Games

For a late afternoon game, the Seattle sun will start almost directly behind home plate at T-Mobile Park. This should put large sections of the upper deck in the shade, with sections 320-342 being the best bet. The smaller sections in the 200-level of the stadium should also find shade with the sun at their back. Sections 220-240 will be the best options, as they are closest to home plate.

Slowly but surely, parts of the 100-level will move into the shade as well. Seats further back in each section and closer to home plate will find the first in the shade, so the rows closest to the field will have to wait. Meanwhile, seats in the outfield, specifically sections 190-195 in center field, as well as 102-112 and 306-312 in right field will be facing the sun most of the game.

During summer months, the sun doesn’t set in Seattle until almost 9:00 p.m., so night games at T-Mobile Park feature plenty of sunlight. The good news is that only a few parts of the stadium will be hindered by it. Almost all of the lower-level seats should be free of sun for an evening game. The only exception is the sections in center and right field. Also, part of the upper deck along the 1st baseline will get the last bits of that day’s sunshine, specifically sections 306-318. Other than those few sections, battling the sun won’t be much of an issue for an evening game at T-Mobile Park.

Use the individual game links on the side (or bottom of the page on mobile) or click or tap here to see the Mariners upcoming game list on SeatGeek. Learn about why we recommend buying MLB tickets on SeatGeek.