The Atlanta Braves moved to Suntrust Park in 2019. Anyone who lives in or has visited the ATL knows how oppressively hot and humid it gets during the summer months. Suntrust Park may be named for the local bank but there’s no denying that it’s also a park with plenty of sun. Fans heading out for a Braves game will have the best ballpark experience if they avoid sitting in the direct sun. This guide will help identify the best Suntrust Park shaded seats.

Suntrust Park Orientation to the Sun

Suntrust Park has a unique orientation among MLB ballparks. Batters faced the traditional northeast direction when they played downtown at Turner Field, but now they look to the south-southeast when they hit. Similarly, fans who knew all the shaded seats at the Ted need to relearn the best places to sit as the old tricks don’t work any more. 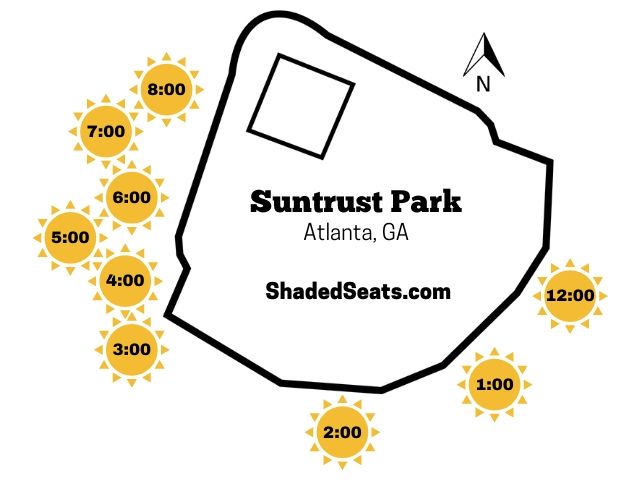 Where are the shaded seats at Suntrust Park?

As a general rule, the seats in the shade at Suntrust Park are located:

Since Suntrust Park faces southeast, the sun is high in the sky during the first pitch of a day game. Shade is in short supply, at least for the first few innings. If you want to guarantee a seat in the shade for the entire game, you need to find cover. Any seat directly behind home plate should work, as long as you are far enough back in the section to have an overhang above your head. The 400-level has a generous roof, so many seats are in the shade, as long as you don’t mind the nosebleeds. That said, the views from sections 424 to 428 are actually very nice, even if a bit high.

If sitting behind the plate isn’t an option, always opt for a section along the first base line rather than the 3rd base line. The sun will rotate around toward the right field foul pole about halfway through the game and the stadium itself will start shielding seats on that side of the park from the sun.

Seats in the Shade at Braves 4:10 Games

Late afternoon Braves games are not common but if you are attending one, picking the right seat will be the difference between a relaxing afternoon at the ballpark and roasting in the hot Atlanta sun. By first pitch the sun is positioned just past the right field foul pole and during the game will advance toward home plate. This means that you must sit on the 1st base side of the park rather than the 3rd base side to enjoy shade.

Seats in the Shade at Braves 7:20 Games

The Braves have one of the latest regular start times in MLB. That said, on the longest days of the year sunset in Atlanta isn’t until nearly 9:00 p.m. Even though shadows will cover most of the park at first pitch of an evening game, uncovered sections in the outfield will still experience some sun during the first few innings. Any section in between the foul poles should be safe at this point though.

Use the individual game links on the left (or top of the page on mobile) or click or tap here to see the Braves upcoming game list on SeatGeek. Learn about why we recommend buying MLB tickets on SeatGeek.