Where are the shaded seats at Kauffman Stadium?

As a general rule, the seats in the shade at Kauffman Stadium are located:

Kauffman Stadium is similar to Wrigley in that there is limited seating in the outfield, which isn’t necessarily a bad thing. There is ample seating space everywhere else, making it possible to find shade if you know where to look. Regardless of the position of the sun, any seat in the somewhat limited 300-level part of the stadium will be covered and have adequate protection from the sun. Kauffman also features an overhang between sections 409 and 431 in the upper level, helping to protect those seated in these areas.

The Royals start a majority of their night games at 7:15 p.m. When the Royals play day games at home, they typically start at 1:15 p.m. Occasionally, games will start an hour before or an hour after these times. However, most of Kansas City’s home games will have either a 7:15 or 1:15 start time.

Kauffman Stadium Orientation to the Sun

Kauffman Stadium is built so that batters face to the northeast, which is where the sun rises every morning. In the evenings, the sun sets beyond the 3rd base side of the stadium. Of course, in between, there is no shortage of sunshine drenching the playing field and large sections of the stands. 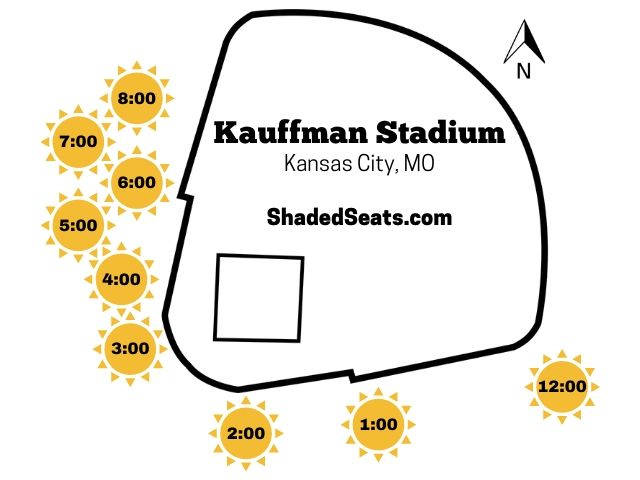 Click or tap here to open the Kauffman Stadium seating chart on Seatgeek.

Seats in the Shade at Royals 1:15 games

At the start of a 1:15 game in Kansas City, the sun is sitting in the southern part of the sky. This will make almost every seat in the 100-level section of the stadium vulnerable for the first few innings. Even those sitting on the 1st baseline who have their backs to the sun. Outside of the back few rows of each section that may get a little shade from the overhang, there is little relief for the seats closest to the field. The same is true for any of the outfield seats, as well as the 400-level sections higher than 431 on the 1st base side and lower than 409 on the 3rd base side.

As the game moves along, those sitting near home plate, particularly on the 3rd base side, will be the first to get some shade. If you can survive some sun early in the game, sections 116-124 and 216-224 in the lower levels should get some protection later in the game, especially if your row is further back. Meanwhile, the limited number of seats in the outfield and those along the 1st baseline close to the foul pole should be avoided during day games. Even those seated close to home plate on the 1st base side won’t receive much protection during a day game at Kauffman Stadium.

Seats in the Shade at Royals 7:15 games

For most of the summer, the sun won’t set in Kansas City until after 8:30 p.m., giving you more than an hour of sunlight at the start of a 7:15 game. By this point, most of the seats on the 3rd base side of the stadium should have their back to the sun and be in good shape. However, those in the upper deck lower than section 409 could be a little vulnerable. Most fans in the right field stands and along the 1st baseline will also have to contend with the sun until it sets more than an hour into the game unless they are close to home plate, ideally in sections 131-137, 231-237, and 425-431.

Use the individual game links on the side (or bottom of the page on mobile) or click or tap here to see the Royals upcoming game list on SeatGeek. Learn about why we recommend buying MLB tickets on SeatGeek.