Dodger Stadium, known affectionately as Chavez Ravine, is the longtime home of the Los Angeles Dodgers. After Fenway and Wrigley it’s one of the oldest stadiums in the majors. Dodger Stadium has the largest capacity of any baseball stadium in the world, meaning there are plenty of seats available, with many of them squarely in the southern California sun. Fans will want to consider seeking out the shaded seats at Dodger Stadium.

Where are the shaded seats at Dodger Stadium?

As a general rule, the seats in the shade at Dodger Stadium are located:

Dodger Stadium Orientation to the Sun

Dodger Stadium is designed with home plate facing north-northeast. In the morning, the sun rises over the right field wall, ultimately setting beyond the right field corner. During the day both the playing field and stands receive plenty of California sunshine. In the summer, fans visiting Dodger Stadium may seek out a seat in the shade to help them avoid a Chavez Ravine sunbath. 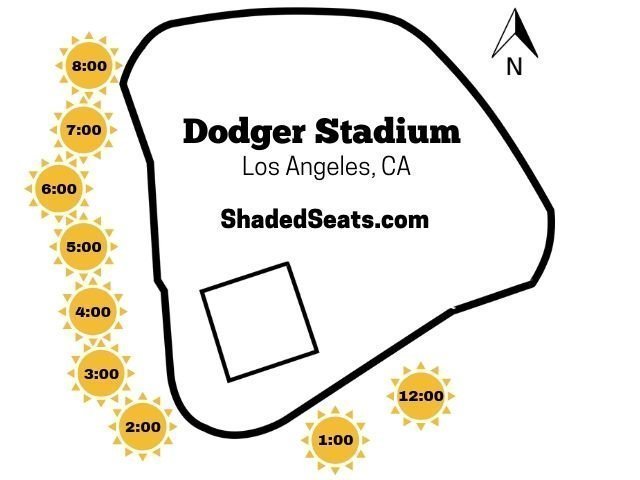 Seats in the Shade at Dodgers 1:10 games

At the start of a 1:10 game at Dodger Stadium, the sun have just hit its highest point. This means the sun is almost directly overhead, drenching the field with sunshine. At first pitch, most field level seats, including those in the outfield, will have no protection from the sun outside of a rare cloud in the southern California sky. The second level of seats (Loge Level) can be a good place to sit. Seats in the back half of the Loge will have an overhang to keep them shielded from the sun, even when it’s at its highest point. The same is true for Reserve Level, which is the upper deck at Dodger Stadium. Seats higher up in these sections will have an overhang above them, bringing shade to the back rows.

For those who insist on sitting as close to the field possible, odd-numbered sections FD 13-31 in the lower level may be free of the sun for most of the game if they are farther back in the section. Meanwhile, most seats on the 1st baseline will be in the sunshine. Even seats in the Loge Level and Reserve Level will need to be at the very back of the section to stay shaded. Finally, any seats in the outfield or the right field corner near the foul pole will find little to no relief from the sun during a day game at Dodger Stadium.

Even on the longest days of the year in Los Angeles, the sun rarely sets past 8:00 p.m. This makes 7:10 games at Dodger Stadium largely free from the sun. However, the occasional game that begins at 6:10 can have close to two hours between the first pitch and when the sun sets. For these games, the sun sets behind the 3rd base side of the stadium, keeping most of the seats on this side of the stadium in the shade.

Even most Field Level seats along the 3rd baseline will be in the shade at the start of the game. Those that aren’t will at least have the sun behind them and know they will be in the shade soon. However, fans sitting in the right field stands will be staring into the sun for the first few innings. Most seats along the 1st baseline will also remain in the sunshine until later in the game unless they are close to home plate or directly beneath an overhang.

Use the individual game links on the side (or bottom of the page on mobile) or click or tap here to see the Dodgers upcoming game list on SeatGeek. Learn about why we recommend buying MLB tickets on SeatGeek.