Busch Stadium is the longtime home of the St. Louis Cardinals. The ballpark opened in 2006, replacing the old Busch Memorial Stadium. It’s located in the heart of St. Louis, just a stone’s throw away from the Gateway Arch and the banks of the Mississippi River. Similar to nearby parks in Kansas City and Atlanta, Busch Stadium has a reputation for being one of the hottest stadiums in the majors. Use this guide to find the best Busch Stadium shaded seats.

Where are the shaded seats at Busch Stadium?

As a general rule, the seats in the shade at Busch Stadium are located:

Day games at Busch Stadium usually start at 1:15 p.m. and evening games at 7:15 p.m., with the occasional game bumped up to 6:15 p.m. For specific details about sections and different start times, read on.

Busch Stadium Orientation to the Sun

Busch Stadium is designed with home plate facing east with a slight tilt to the north. If games there were played at dawn, batters would be looking directly at the sun during sunrise. Obviously, this isn’t a problem for games played in the early afternoon or evening. However, the stadium receives plenty of sunshine both on the field and in the stands. 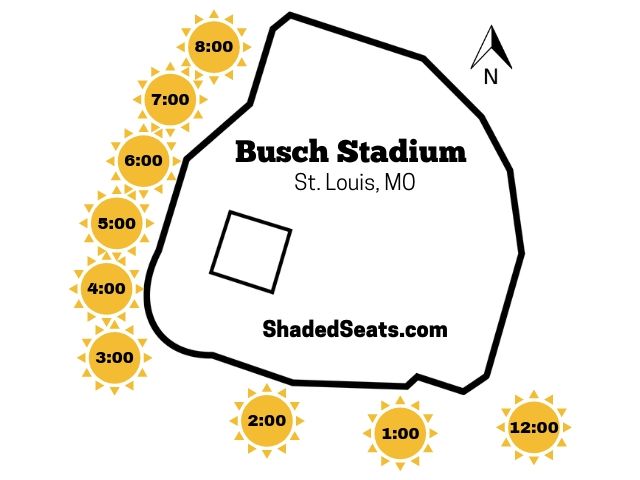 Seats in the Shade at Cardinals 1:15 games

At the start of a 1:15 game during the summer, the sun will be high in the southern sky. During this time, your best bet is to sit as far back in a particular section as possible. The stadium has overhangs to help protect fans during hot summer days.

In the upper levels, sections 431-454 and 361-372 have large overhangs to shield fans seated in the back half of those sections. In the lower sections, the last few rows of each section also have cover that will provide some protection from the sun. However, this only applies to seats in foul territory, not beyond the outfield wall. It also applies more to seats on the 1st baseline. During the game, the sun will gradually move west toward home plate, increasing the shade on the 3rd base side of the stadium, as those fans will start to have the sun at their back.

Generally speaking, the closer you are to the field, the longer you’ll have to wait to be in the shade for a day game at Busch Stadium. Sections 170 and 171 in left field offer a slight exception, as the back half of the section will have an overhang above. However, the rest of the outfield seats offer little or no protection from the sun. Even as the sun moves west toward home plate and the 3rd base side of the stadium during the course of the game, the sun will continue to beam down on the outfield bleachers at Busch Stadium.

Seats in the Shade at Cardinals 7:15 games

While the sun can be brutal at Busch Stadium for day games, it will set no later than 8:30 p.m. during the summer. With 7:15 games, this usually means fans will only have to put up with the sun for about an hour or so during evening games. Granted, it will still be warm, but fans won’t be battling the sun for long.

During evening games, fans seated on the 3rd base side of the stadium will have the setting sun at their back and be well-protected. However, one quirk of Busch Stadium is a break in the overhang of the upper deck. Fans in sections 355-360, 255-260, and 154-160 may feel a little more heat from the setting sun than other areas of the ballpark. Those in the right field stands and toward the right field corner along the 1st baseline may also have to do battle with the sun for a few innings until the sun fully sets.

Use the individual game links on the side (or bottom of the page on mobile) or click or tap here to see the Cardinals upcoming game list on SeatGeek. Learn about why we recommend buying MLB tickets on SeatGeek.