The Oakland Athletics play their home games at RingCentral Coliseum, though most fans still refer to it as Oakland-Alameda County Coliseum or just Oakland Coliseum. It’s one of the only remaining multi-purpose stadium in MLB. The As share the stadium with the Raiders. Despite the Bay Area having a moderate climate, Oakland Coliseum receives plenty of sunshine during the summer and this is one of the toughest big league parks to find shade. Fans can use this guide to find the best RingCentral Coliseum shaded seats.

RingCentral Coliseum Orientation to the Sun

When Oakland Coliseum is set up for baseball, home plate faces almost perfectly to the northeast. If the A’s ever played a game at dawn, the sun would rise over the center field wall and shine directly into the batter’s eyes. Obviously, that’s not an issue during baseball season, but the sun does shine down on large sections of the stadium at various times of day, sometimes leaving few areas in the shade. 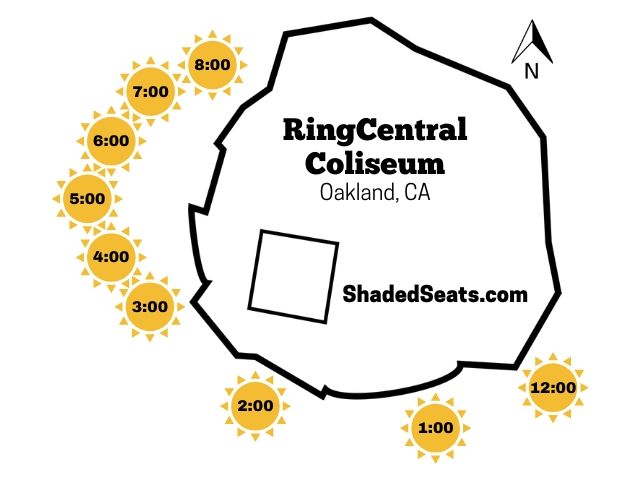 Where are the shaded seats at RingCentral Coliseum?

As a general rule, the seats in the shade at RingCentral Coliseum are located:

The Athletics start a majority of their home games at 7:07 p.m. Most Sundays, the A’s will play afternoon games starting at 1:07. Occasionally, game times will differ, but never by more than an hour.

Seats in the Shade at Athletics 1:07 games

At the start of a 1:07 game in Oakland, the sun will be just past its highest peak for the day. This will make it hard to find any shade at game time. However, the good news is that the sun will slowly move behind home plate during the course of the game. This means that the closer you can sit to the plate, the more likely you are to be in the shade as the game moves along. Specifically, sections 213-221 are usually the best options. Seats in the 100-level, even those close to home plate, will take longer to get in the shade unless they are in the back few rows of 113-121.

Unlike other MLB parks, Oakland Coliseum has no overhang in the upper level of the stadium. If the 300-level seats are available for a day game, none of them will provide much protection if at all. In short, there are few places to find shade during a day game at Oakland Coliseum outside of a 200-level seat behind home plate.

Seats in the Shade at Athletics 7:07 games

For evening games in Oakland, it can be a little easier to avoid the sun than during day games. However, due to the nature of it being a multi-purpose park, plenty of seats will still be in the shade, for at least a few innings during the summer. The good news is that the sun will be low in the sky and behind home plate as it starts creeping up the 3rd baseline. This will make sections 314-322 in the upper deck a viable option. The same can be said of sections 214-222 and 114-122, which are the areas most likely to be in the shade by game time.

In fact, most seats along the 3rd baseline should be in good shape for a night game, especially the lower levels, as the sun will be at your back. However, most seats in the outfield will be facing the sun until it finally sets, specifically sections 335-355 in center field. Seats in the right field corner, sections 300-304, 200-204, and 101-105 may be battling the sun during the early innings.

Use the individual game links on the side (or bottom of the page on mobile) or click or tap here to see the Athletics upcoming game list on SeatGeek. Learn about why we recommend buying MLB tickets on SeatGeek.