Angel Stadium in Anaheim, California is the home of the Los Angeles (formerly Anaheim) Angels. It opened in 1966, making it the fourth-oldest ballpark in the majors. Angel Stadium receives plenty of Southern California sunshine during the year, especially during baseball season. Fans seeing the Angels play would be wise to keep that in mind when selecting tickets. Use this guide to help you find the best Angel Stadium shaded seats.

Angel Stadium Orientation to the Sun

Angel Stadium is built with home plate facing almost perfectly to the northeast. In the morning, the sun rises over the right-center field fence, working its way along the 1st baseline during the day and ultimately setting behind the 3rd base stands. In between, there is plenty of sunshine splashing down on the field and large sections of the stands. 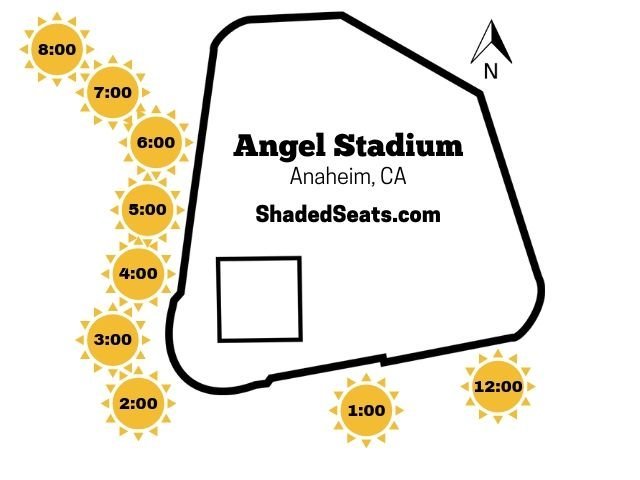 Where are the shaded seats at Angel Stadium?

As a general rule, the seats in the shade at Angel Stadium are located:

The Angels play a majority of their home games at 7:07 p.m. The main exception is Sunday home games, which usually start at 1:07. There are a few occasions during the season when the game time is moved up an hour. This usually occurs during Saturday home games late in the season that start at 6:07.

Seats in the Shade at Angels 1:07 games

At the start of a 1:07 game at Angel Stadium during the summertime, the sun will be getting close to a location behind home plate. This should help provide some protection to those sitting closest to home. Those sitting in the back rows, especially in the 400-level and 500-level sections close to home plate, will have the best odds of finding the shade. The 200-level seats in foul territory have an overhang from the 300-level seats to keep them shielded from the sun. However, those seated in the 100-level closest to the field will likely be in the sun for the start of the game. Seats in the outfield and near the foul pole on both sides of the stadium will have no protection from the sun.

As the game moves along, the sun will slowly start to creep toward the 3rd base side of the stadium. This will help produce a little more shade for fans seated along the 3rd baseline. The farther back you are from the field, the more likely you are to be in the shade, so most 100-level seats will remain in the sun for large portions of the game. A majority of the seats in the 1st baseline will be in the sun throughout the game outside of the 200-level and portions of the upper deck. Sections 132-135 and 236-249 will be the worst at Angel Park for avoiding the sun during an early afternoon game.

Seats in the Shade at Angels 7:07 games

One benefit of southern California in the summer is that the sun rarely sets after 8:00 p.m. Most nights, there’s an hour or less between the start of a 7:07 game at Angel Stadium and sunset. By the start of the game, the sun will be well behind the 3rd base side of the stadium. This will keep most of the fans sitting along the 3rd baseline in the shade regardless of how close they are to the field. Parts of the 1st baseline will be in good shape as well, especially those seated in the upper levels, as well as those sitting close to home plate. Again, the worst place to be will be the right field seats and sections 132-135 that are within spitting distance of the foul pole. Fans in these seats will have to contend with the sun until it officially sets around 8:00 p.m.

Use the individual game links on the side (or bottom of the page on mobile) or click or tap here to see the Angels upcoming game list on SeatGeek. Learn about why we recommend buying MLB tickets on SeatGeek.